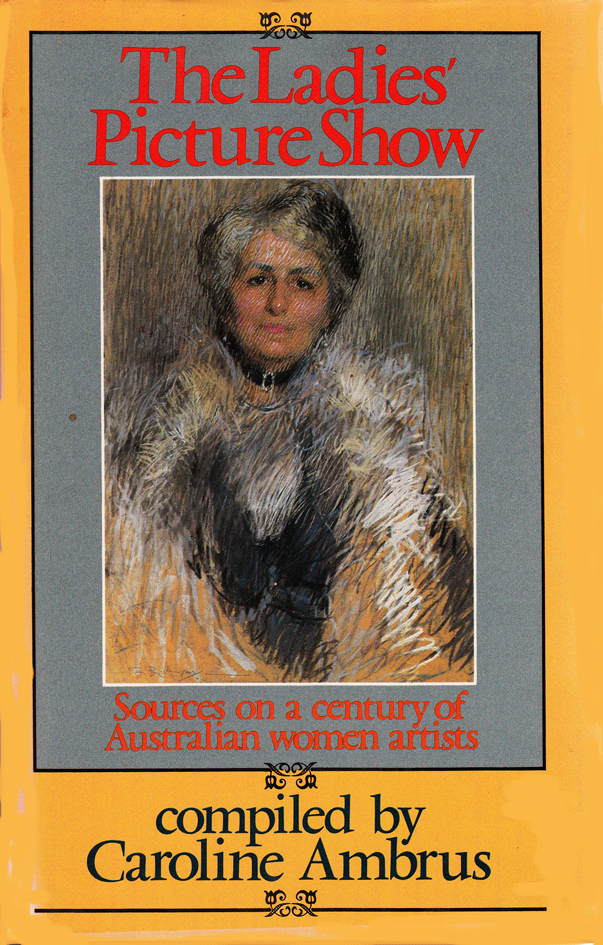 In seeking information on women artists, the author discovered that there was little to be found. She went on a search for the past through libraries, archives and art galleries. The result is this book of sources on women artists  which has become a valuable reference source for art historians since its publication in 1984.

From 1969 to 1971 I was a student of painting at the Canberra Technical College and at the East SydneyTechnical College. In 1973 I attended the Canberra College of Advanced Education with a view to obtaining a Bachelor of Education, majoring in Art and Librarianship. I had intended to become an art teacher. It was around this time I 'graduated' as a feminist.
During my years at Art School I had not heard any reference to an Australian female artist, either living or dead. I had assumed that they were not mentioned because they had not 'made it' in the art scene of their day and had remained, as we female students were destined to become, marginal artists or closet daubers.
My library studies at the Canberra College involved the researching and compiling of bibliographies. For one of these assignments I was casting around for a subject of interest to me. I decided to check out women artists to see if there were any in Australia, and if there were, to follow up any bibliographic sources on them. The material in this publication represents the continuation and development of what was once a college assignment. It also represents the conjunction of three diverse, but potentially compatable disciplines, art, feminism and librarianship. 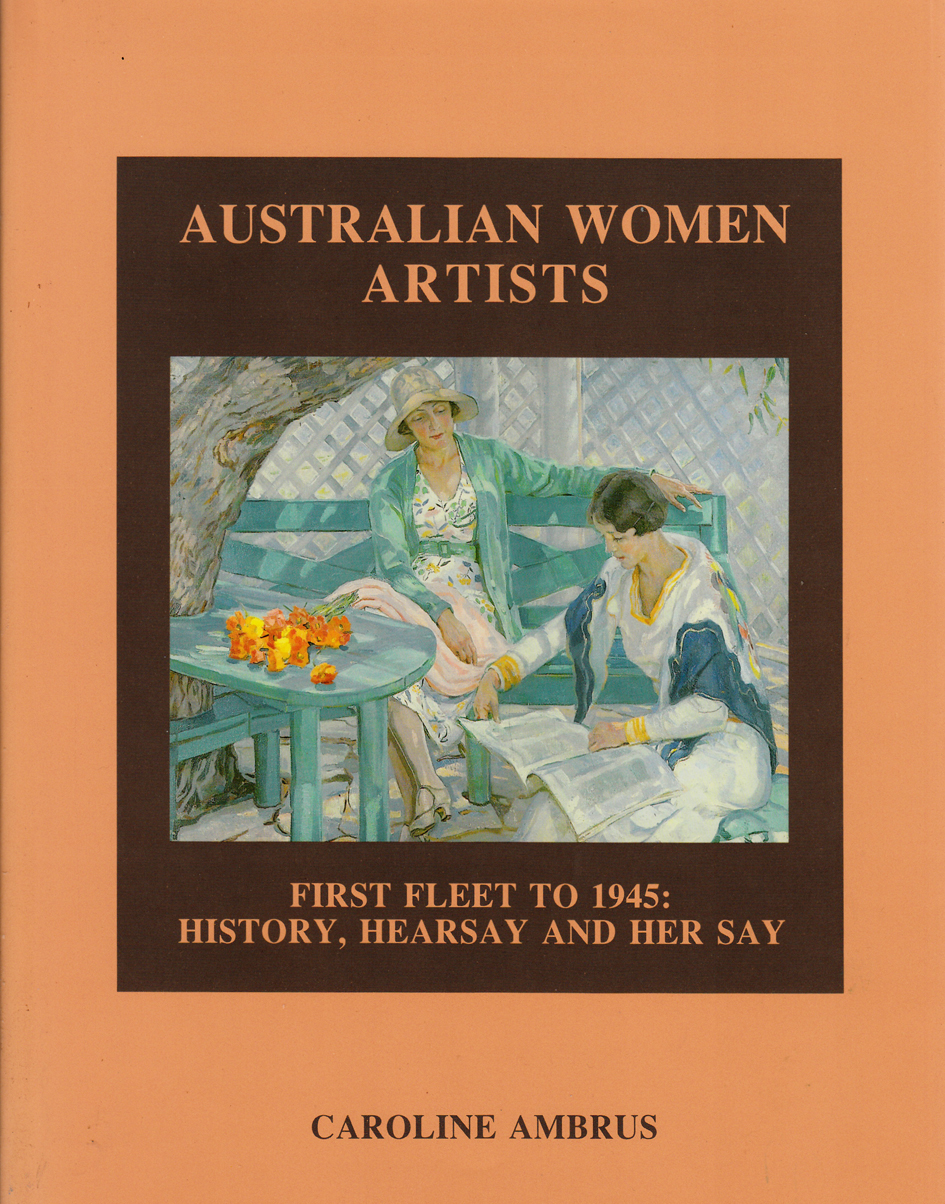 The odds that women would make a success of any sort of career were very low. Women had to fight for the right to a career which, for each succeeding generation, took them back to square one.  This was particularly true for women artists. This comprehensive history traces the struggle of four generations of women to succeed in establishing viable careers in the arts.The material for this book was interpreted from my perspectives as a woman, an artist and a librarian. My experiences as a woman gave me the major motivation for writing it. My experience as a librarian gave me a sensitivity toward the issues of documentation and preservation, as they affect women artists. My experiences as an artist kept me in tune with the the politics of the art world and my feminism provided an ideological framework that helped to make sense of the material. Some may question my interpretation, but the facts are self evident and my subsequent conclusions may seem to be speculative and open to question by others. However, hopefully these differences will open the door to a debate which will enlighten some aspects of Australian art history. The intention of this book is to suggest alternative explanations to those which are traditionally accepted, to examine the issues women artists had had to confront, to raise questions and to answer some.

This book is about the generations of women artists who have been erased from the history of art in Australia. This happened as the result of a combination of indifference, which resulted in the loss of visual sources, and of prejudice, which excluded women from historical accounts. If the development of women's art had been apart of the tradition of mainstream art, then the activities of women artists would have been recorded and each generation would have had some knowledge of their female forebears. Subsequently, it would then have been possible for each generation of women artists to build on this tradition, in a way which was expressive of the needs and aesthetics of their own period. The dismissal of women artists and the loss of the visual sources has prevented the development of this women's tradition. The process of indifference and exclusion amounts to one of erasure and invention, which means that each new generation of women have had to invent the very concept of the woman artist in order to establish viable careers. Women have had to battle against contemporary mores which operated to keep women in the home and out of the professions. Without a sustained tradition to support them, women artists have had a tenuous hold on their professional status and their work seems under-developed in terms of their obvious talent.
The successful careers of many women artists were a testimony to their prodigious talent and energy and some of their work is comparable to the best offered by their male peers. Not only did they face the challenge of transcending the cultural and biological limitations that femininity can impose, limitations that femininity can impose, but they established their careers in a social milieu which was hostile to the arts and to artists. In spite of the obvious success of women artists in each generation they were consistently ignored by their contemporaries and by historians. Some of their successful moments are here briefly reiterated.

This publication is aimed at challenging the mainstream's narrow definition of what comprises art and who are the artists. The women featured in this book have taken up this challenge and begin their campaign by publication, an action which reverses the art world protocol of posthumously validating an artist's career with a monograph. This publication is a timely, effective, affirmative and audacious step into the future and will be the forerunner of many similar books about contemporary, living women artists.

Women artists face many difficulties at the very source of their inspiration, that first impulse to make art. Most women artists have had to reconcile their roles as wives and mothers with their artistic aspirations. While their family needs are a first priority, many women have had the experience of scrounging enough money from the housekeeping and part-time jobs to pay for the making and documentation of art. Then there are the tasks of preparing for exhibitions, framing art, organising self promotion, while making sure life continues to run as smoothly as the family has come to expect. Discrimination is another pressure experiened by women artists when they attempt to establish any sort of career path in the arts. This is as much based in aesthetics as it is in gender. It is evident that the majority of women are exclude from keynote exhibitionns and publications. This is confirmed by a perusal of the visual arts literature and a visit to the public galleries on an average day in an average year. The inclusion of a few women artists in such a male dominated and aesthetically limited milieu does little to dent the reality, that the majority of women artists remain invisable. The few women artists included in these galleries amounts totokenism which implies that if one woman can 'make it' then any woman can 'make it'. It then follows that when other women fail to win acceptance, it is because of their personal or professional shortcomings, rather than because of any discrimination inherent in the system.