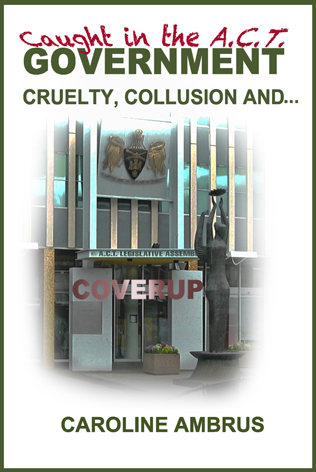 CAUGHT IN THE ACT — GOVERNMENT CRUELTY, COLLUSION AND COVER UP

The ACT Government is a scaled down example of governments everywhere, with the same corruption, coverups and cruelty. The three couples featured in this book complained about the Government's maladministration and challenged it when lies, denial, delays and obfuscation was the response. This book relates how the ACT courts, the ombudsman and other complaints agencies fail to deliver accountability. It examines the laws that enabled the government and accountability agencies to evade their responsibilities in delivering justice to people who have been wronged by the bureaucracy. The ACT Government, like governments everywhere, aims to look good whilst it is behaving badly.

Caught in the ACT contains the stories of several Canberra residents who entered the world described by Franz Kafka — a bureaucratic nightmare. They seem to have antagonised government officials because they resisted arbitrary demands. Even worse, they sought to expose rule violations by the officials who were making demands of them. They entered a long tunnel of letters, complaints, demands, appeals, expense and stress.
The book also contains an analysis of the ACT government and its problematical features, such as having only one chamber and administering a small population where personal connections and conflicts of interest abound.
Most Canberra residents, if they are lucky, will go through their lives and never be aware of the petty bureaucratic struggles occurring in their seemingly placid suburbs. Yet in households here and there throughout the city, there is continual angst and anger at officials and politicians who toss their weight around and are seemingly unaccountable.
I do not know the author, Caroline Ambrus. Nor have I independently studied the cases she describes in exquisite detail. However, the cases ring true based on my long involvement with whistleblowers. So let me explain the connection between whistleblowers and the Canberra residents whose stories are told here.
A typical whistleblower is a conscientious employee who believes the system works. When encountering some apparent problem, this dutiful employee reports it to the boss. Sometimes the right thing is done: the matter is investigated and, if necessary, problems are fixed. But in some cases, the employee has inadvertently stumbled onto something bigger. For example, the boss might be involved in a scam or tolerating corrupt operations by others. The loyal employee, by becoming aware of the issue, become a threat to the dodgy operators. And so reprisals begin: petty harassment, ostracism, referral to psychiatrists, reprimands, even dismissal.
This is just the beginning. The conscientious employee who believes in the system realises that the reprisals are unfair and seeks justice, by appealing to the boss's boss, to the board of management, to the Ombudsman, an anti-corruption agency, the courts or any number of other appeal bodies. Having talked to hundreds of whistleblowers, what happens next is predictable to me: the various appeal processes and agency do not fix the problem. Sometimes they make it worse.
The reality is that taking on a more powerful opponent is nearly always a no-win proposition. Usually the only things that can give the employee a chance are publicity and collective action. Media coverage can make a big difference, and so can efforts by trade unions and action groups.
The saddest aspect of the typical whistleblowing story is the unwelcome realisation that the system does not provide justice. The world can be very unfair, and the rules don't seem to matter to those administering them.
The individuals whose stories are told in Caught in the ACT do not fit conventional definitions of whistleblowers. They are not employees, but rather citizens trapped in fruitless struggles over seemingly petty matters. But there are important similarities between their stories and those of whistleblowers. In both cases, something is wrong and, rather than acquiescing, individuals decide to resist, pointing out that the rules haven't been followed. Reading the stories, the actions by ACT officials look to me very much like reprisals — reprisals for refusing to give in and for pointing out that officials have violated their own rules.
In writing Caught in the ACT, Caroline Ambrus has taken the most important step in challenging abuses, which is to document the problem and explain it to others. Some of the stories are quite complicated; the careful explanations of their complexities are one aspect of the book that impresses me. In studying cases of dissent, abuse and bureaucratic bungling, the stories are invariably complex, and it is incredibly hard for anyone to explain what happened in a clear and logical fashion.
You do not have to accept Caroline Ambrus' perspective and interpretations, but there is sufficient material here to show that things could be done better, and should be done better. For this reason, this book deserves to be read.

Brian Martin is professor of social sciences at the University of Wollongong and vice president of Whistleblowers Australia. Web: http://www.bmartin.cc/

Self Government in the ACT is unfinished business. It was imposed in a hurry on a reluctant population thirty four years ago. In spite of being Westminister based, a senate was not included. This meant that the legislature could not restrain the ambitions of a majority government, should one ever be elected. Democracy, territorial style would not be feasible unless the minority parties co-operate in governance.

Then the unthinkable happened. In 2004 the Labor Party was elected with a majority. Since then the ACT Government has removed checks and balances to suit its priorities: introducing inappropriate legislation; reducing consultation with community groups; conducting frivolous lawsuits; and by targetting individuals allegedly guilty of minor infractions of the government's dictates. Meanwhile, the demoralised Liberal Party opposition has failed to challenge or modify the Government's tyannical tendencies. Subsequently, capital democracy is on the line.

In addition, the ACT is not politically autonoous. As the seat of Federal Parliament, the Commonwealth has retained control over planning matters of national significance, ignoring the wishes or needs of the ACT population. As a result, political tensions and unresolved issues have developed between the federal and territorial governments. The lines of responsibility between the principal planning authorities, the National Capital Planning Authority and the ACT Planning and land Authority hae not been clearly drawn. The fall out is bad planning and wasted resources. Consequently, many unsuitable developments dot the Canberra landscape which have affected the ambience of the Territory.

An authoritative voice from the past has the last word.

The Community Alliance Party had its official launch at the Albert Hall, Yarralumla, on Thursday 12 June 2008. Tony Powell AO, former Commissioner for the National Capital Development Commission was one of the keynote speakers. His inspiring, insightful speech is transcribed as verbatim as possible from the video of the event by Jonathon Reynolds posted on www.vimeo.com/1196035.